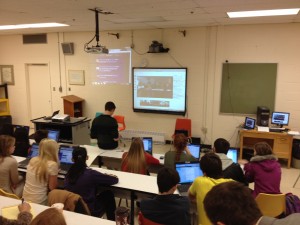 I have been busy lately supporting lots of connections between learners from around the world, but perhaps none more important that the connections I witnessed between students from five high schools in my area during a virtual town hall focused on the issues around bullying. Through the power of technology these students were able – with a little support and guidance from adults – begin a conversation towards making their schools a bit safer and more welcoming places to be for everyone.

We used two free platforms for connection, Google Hangout and Twitter. We have in-house systems on our network that would allow the five schools to connect but as we were bringing in a couple of people to share from outside our system, we settled on Google Hangout as the platform for connecting, with a Twitter backchannel – the hashtag #speakupNB was the special glue to bind the conversation together – providing more voice to a broader number of students.

After a few minutes of trial and error on how to best coordinate the show, things ran pretty smoothly for a first attempt. Most of the students were being exposed to Hangout for the first time, but they really liked how the platform auto highlights the person / site who was talking. It allowed all sites to focus on the speaker with a minimum of switching.

While most of the students were Twitter users for entertainment purposes, they quickly caught on to seeing how tweeting can be used for more serious purposes as well. Each site had two screens – one for the hangout and one for the backchannel twitter feed (we used Twifferfall to bring everyone’s tweets together).

Unfortunately, many teachers, administrators and parents see social media as a challenge and not a solution. Fortunately, the St. Thomas University Social Work students and the teachers involved in this project see that the use of social media needs to be seen as an opportunity to connect learners for the answers. Only by infusing a focused digital citizenship component into our curriculum and widely engaging with our students in the digital landscape will we be able to model proper etiquette and the power of the web and combat issues like bullying.

A big shout out to New Brunswick Education Minister Jody Carr who, after interacting with the students all morning via Twitter, left the legislature, jumped in his car and joined the students and Fredericton Mayor Brad Woodside for the last few minutes. That effort placed value on the conversations the students were having and will go a long way to encouraging them to continue their efforts.

One thought on “Virtual Town Hall”